Regular consumption of soda may harm your fertility

admin
Admin
posted on 3 years ago
—
updated on 3 years ago
1,852
views
Medical News News
Are you trying to get pregnant? You must cut back on soda consumption; the latest study has found that it could reduce your chances of conceiving.

New research finds that soda could harm your chances of becoming pregnant.

One or more sugary drinks — for either men or women — were shown to decrease the chance of pregnancy, a new study from the Boston University School of Medicine found.

According to the recent report in the United States, infertility is experienced by around15 percent of couples, with the annual cost of fertility treatments in the country equaling more than $5 billion.

If modifiable risk factors can be identified, then raising awareness of them may help to reduce the psychological stress and financial burden experienced by couples who are struggling to conceive.

Examples of modifiable risk factors for infertility might, for instance, include lifestyle factors such as diet.

However, the past half a century has seen a significant rise in the amount of added sugar in the average diet of a U.S. individual. One third of this total sugar intake comes from soda and other sugar-sweetened drinks, which are associated with weight gain and conditions such as type 2 diabetes.

Drinking soda is also tied to early menstruation and poor semen quality — although few studies have investigated the direct effects that soda may have on fertility.

Drinking soda was linked with a 20 percent reduction in conception

For further investigation potential associations between drinking soda and infertility, researchers from Boston University School of Public Health in Massachusetts surveyed 3,828 women — all aged between 21 and 45 — and 1,045 of their male partners.

All of the participants lived in the U.S. or Canada and were a part of the Pregnancy Study Online web-based prospective cohort study. 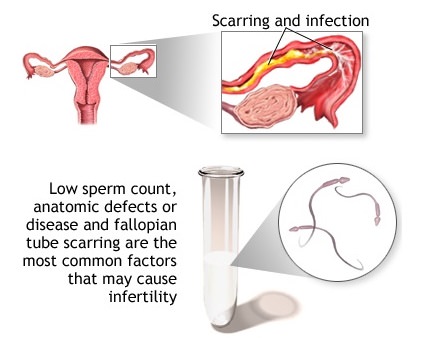 For their new research the team collected data on the participants' medical history, lifestyle factors, and diet. The female subjects also completed follow-up questionnaires every 2 months until they either became pregnant or the 12-month follow-up period came to an end.

By evaluating their data, the researchers revealed that drinking soda was linked with a 20 percent reduction in the average monthly probability of conception for both men and women.

Furthermore, drinking energy drinks was tied to even greater reductions in fertility, but the study authors suggest that this result should be interpreted with caution,as the association was based on results from only a small number of participants.

The team did not find a strong association between infertility and drinking fruit juices or diet sodas.

Cutting back on sodas may increase fertility

Leader and main authors of the study explain that given the amount of sugary drinks consumed across the U.S., their findings may have important implications for public health.

"We found positive associations," says lead study author Elizabeth Hatch, who is a professor of epidemiology, "between intake of sugar-sweetened beverages and lower fertility, which were consistent after controlling for many other factors, including obesity, caffeine intake, alcohol, smoking, and overall diet quality."

"Couples planning a pregnancy might consider limiting their consumption of these beverages, especially because they are also related to other adverse health effects." Elizabeth Hatch