admin
Admin
posted on 3 years ago
—
updated on 3 years ago
2,369
views
Health & Diseases News
The new study report warns about the role of obesity in cancer. About 40 percent of all cancers are related to obesity, according to the new study, which suggests that these cancers would be preventable if weight was kept under control.

Seniors over the age of 50 who are overweight or obese are at high risk of developing certain types of cancer, suggests a new report.

Researchers found a link between obesity and 40 percent of all the cancers diagnosed in the United States, health officials reported Tuesday.

The new study report warns about the role of obesity in cancer. About 40 percent of all cancers are related to obesity, according to the new study, which suggests that these cancers would be preventable if weight was kept under control.

Which doesn't mean too much weight is causing all these cancer cases, just that there's some kind of still-to-be explained association, according to the U.S. Centers for Disease Control and Prevention.

Yet, the study findings suggest that being obese or overweight was associated with cancer cases involving more than 630,000Americans in 2014, and this includes 13 types of cancer.

C.Brooke Steele, of CDC's Division of Cancer Prevention and Control, is the first and corresponding author of the report.

The findings are particularly important given the alarming statistics on obesity in the United States. Between 2013 and 2014, the CDC note, as many as 2 in 3adults were deemed overweight or obese.

Finding link between obesity and cancer

One of the main authors of the study Dr. Steele and colleagues examined cancer incidence rates using data from the U.S. Cancer Statistics 2014, as well as looking at trends between 2005 and 2014. 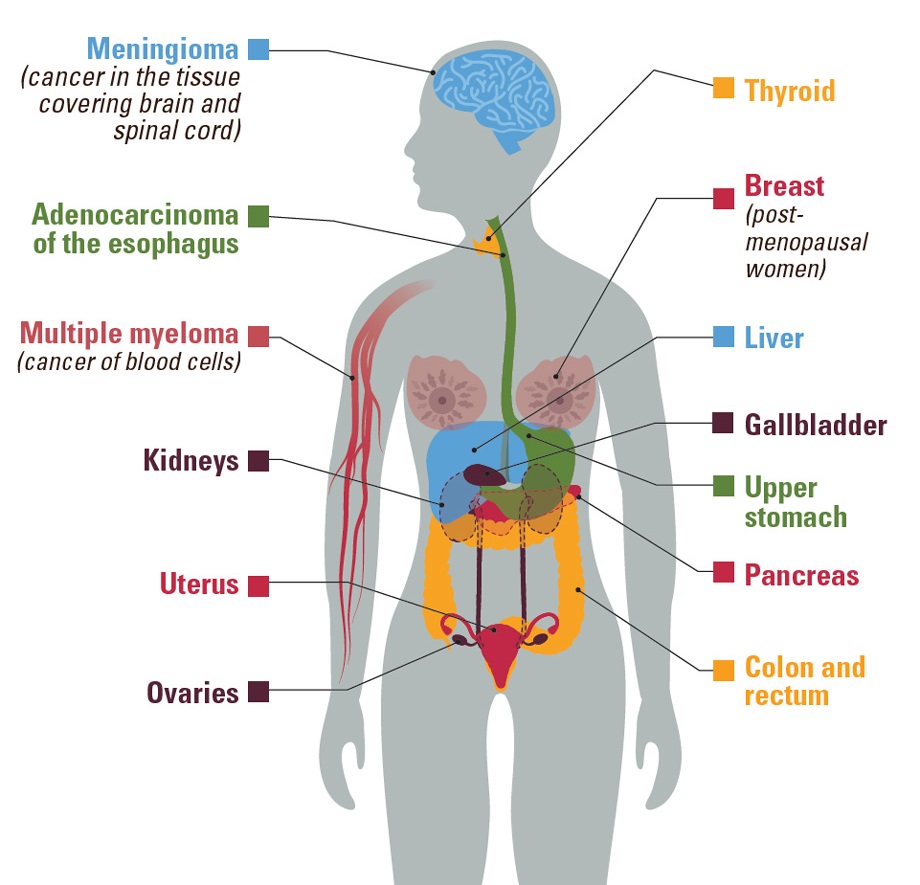 For their study the researchers looked at the 13 types of cancer that have traditionally been associated with being overweight and having obesity. These include a type of esophageal cancer called esophageal adenocarcinoma, postmenopausal breast cancer, colorectal cancer, endometrial cancer, gallbladder cancer, and gastric cardia cancer.

Furthermore, the researchers looked at cancer of the kidney, liver, and thyroid, as well as ovarian and pancreatic cancer. The report also examined meningioma, which is as low-progressing type of brain tumor, and multiple myeloma. Steele and team grouped and analyzed the data by sex, age, ethnicity, geographic area,and the site where the cancer appeared.

More than 630000 obese people are suffering for cancer

CDC report that in 2014, approximately 630,000 people in the U.S. received a diagnosis of one of the aforementioned cancers, which represents a staggering 40 percent of all diagnosed cancers.

The researchers also observed that the incidence rate was particularly high among adults aged 50 and above. In fact, 2 in 3 of these cancers occurred in those aged between 50 and 74. 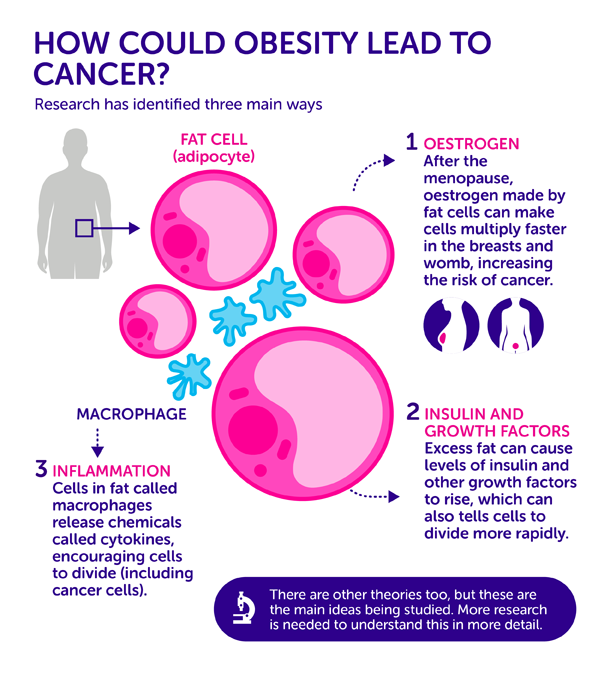 Furthermore,gender-wise, more cancers were linked with obesity in women than in men.And more specifically, 55 percent of the cancers affecting women and 24 percent of those affecting men were related to obesity.

Regarding obesity-associated cancers, these rose by 7 percent between 2005 and 2014. By comparison, the incidence of cancers not associated with obesity declined by 13percent during that time. Colorectal cancer also decreased by 23 percent, most likely due to screening practices.

"The burden of overweight- and obesity-related cancer is high in the United States," say the authors.

They add that it "might be reduced through efforts to prevent and control overweight and obesity," and they conclude that "comprehensive cancer-control strategies, including use of evidence-based interventions to promote healthy weight, could help decrease the incidence of these cancers in the United States." Dr.Brenda Fitzgerald, who is the director of the CDC, comments on the findings.

"A majority of American adults weigh more than recommended - and being overweight or obese puts people at higher risk for a number of cancers - so these findings are a cause for concern [...] By getting to and keeping a healthy weight, we all can play a role in cancer prevention." Dr.Brenda Fitzgerald

The CDC hasalso released a video for public awareness, which you can watch below.