admin
Admin
posted on 2 years ago
—
updated on 2 years ago
805
views
Medical News News
Most of us think that controlling our food cravings and sticking to a diet depend largely on our willpower, but our biology has a different story to tell. New research shows that a complex interplay between calories, digestion hormones, and neurons determines what we eat and when.

What happens in our brain when we're hungry, and is there anything we can do to shut down the feeling?

Most of us think that controlling our food cravings and sticking to a diet depend largely on our willpower, but our biology has a different story to tell. Now, new research shows that a complex interplay between calories, digestion hormones, and neurons determines what we eat and when.

At present, more than one-third (36.5%) of adults living in the United States are obese. Even more fall into the overweight category, and these figures do not even include children, who are a major casualty of the continuing obesity epidemic. And this is not just a problem in the U.S. Globally, in 2016, over 1.9 billion adults were overweight, and of these, 650 million were obese. But the new study thinks that it could provide a solution to this growing issue by “shutting off” the body’s biological “hunger alarm.”

In the latest study, published in the journal Cell Reports, researchers at the University of Pennsylvania (UPenn) explored and explained the biological mechanism behind the feelings of hunger. They found that, while smelling or seeing food could temporarily turn off neurons linked to the desire to eat, these neurons only stay turned off if the stomach signals to the brain that the person has eaten.

While there may be some eating habits that we can control, our biology determines much of our appetite, and there's more and more research that confirms this.

Medical News Today have recently reported on a study that identified a class of glial brain cells in our hypothalamus — that is, the appetite-controlling area of our brain — which, when activated by certain nutrients, "tell us" to stop eating.

Researchers at the University of Pennsylvania in Philadelphia — led by J. Nicholas Betley, an assistant professor in the Department of Biology in the university's School of Arts and Sciences — delve deeper into the interplay between our gut and our brain.

The new study looked at what it is that triggers our appetite-stimulating neurons and— more importantly for our weight management efforts — what it is that switches them off.

The so-called agouti-related protein-expressing neurons (AgRP) are neurons in our hypothalamus that become activated when we are hungry. As Betley explains,"When these neurons are firing, they're basically telling you, 'You'd better go get food; you're starving.'" 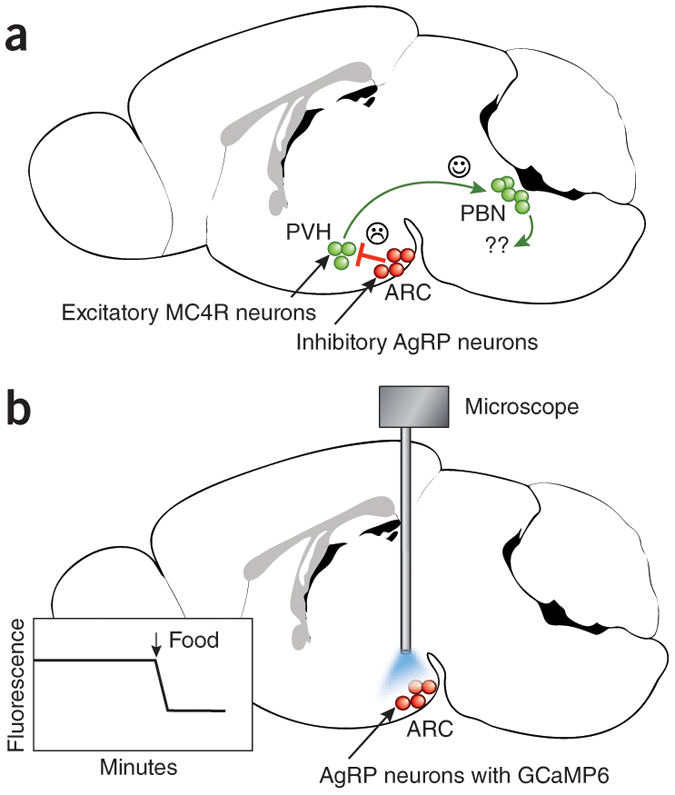 AgRP neurons are "a sensitive alarm system," Betley says. But, apart from by eating, is there any other way that you can turn the alarm system off?

A previous research led by Betley revealed that AgRP neurons deactivate when rodents eat, but interestingly, also when they see or smell the food.

In other words, if you're at a restaurant, feeling hungry, and waiting impatiently for your food — your AgRP neurons would be firing up in an impatient"chatter," telling you to eat. But, as soon as the waiter brings the food to you and you can see and smell it, these neurons quickly pipe down. For the new study, however, the team wanted to look more closely at the difference between how these neurons are shut down upon eating, and how they are shut down by the mere sight and smell of incoming food.

Nutrients are the primary regulators of AgRP neurons

For the new study, Betley and team used in vivo calcium imaging — a method that allows the researchers to track the activity of neurons with a high degree of specificity — to study genetically modified mice.

In separate trials, the mice were offered three different meals: regular chow(with which they were already familiar, so they knew how it tasted and smelled); a calorie-free, strawberry gel that was wholly unfamiliar to the rodents; and the same gel but this time with calories.

As expected, when seeing the standard chow, the mice associated its smell and appearance with satiety, so their AgRP neurons decreased in activity.

But when the rodents were given the calorie-free gel, seeing and smelling the food did not affect the neurons: their activity levels stayed just as high.

After eating the calorie-free gel, AgRP neuronal activity decreased, but only for a little while. The more repeatedly the mice were given the gel, the smaller was the decrease in the activity of the neurons, indicating that the rodents had come to associate the gel with a low amount of calories.

Finally, when the same mice received the calorie-containing gel, AgRP neurons decreased in activity and continued to "lay low" for a long time.

To solidify their findings, the team repeated the experiments in a reversed order— that is, starting with the calorie-containing gel — and used a different group of mice. They also infused the gel straight into the rodents' stomachs,and they found the same calorie-dependent effects.

Finally,infusions were repeated with pure sugars, fats, and proteins. The more calories the rodents received, the lower dropped the activity of AgRP neurons.

"What this study conclusively demonstrated," says Betley, "is that nutrients are the primary regulators of this alarm system," referring to AgRP neurons.

How can we "manually" control the activity of AgRP Neurons?

Therefore the new findings prompted the researchers to figure out ways in which to"manually" control the activity of AgRP neurons.

So, they administered the rodents three hormones that are usually secreted during digestion: cholecystokinin, peptide tyrosine, and amylin.

Betley notes that a similar cocktail may work for treating obesity in humans. He further comments on the relevance of the findings for humans.

But Betley admits that there is still a significant number of questions to be answered before that is a possibility,“It would be interesting to see whether consuming smaller meals more frequently might lead to less activity in the neurons and thus less food intake overall. Or maybe we can develop better combinations of foods or better ways of eating so we can avoid that 9 p.m. binge on Oreo cookies when you’ve had a really great diet all day.”

The future implications for this capability could be miraculous. Astronauts on their way to Mars, or anyone stranded and rationing food supplies could extend their reserves, and redirect psychological energy to the tasks at hand. However, “turning off hunger” is a euphemism away from anesthetic substitute. If we peer into this hypothetical more darkly,impoverished peoples, whether homeless and domestic or third-world citizens waiting for philanthropic help, may become too reliant, and could potentially die of starvation.